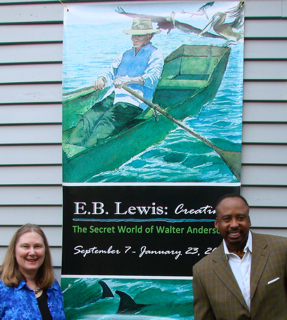 Hester & E. B. at the opening of the exhibition based on the book. 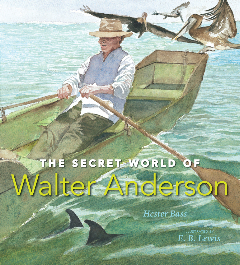 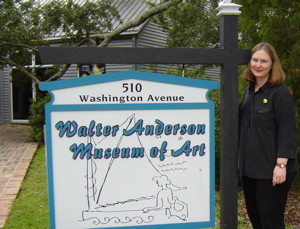 Seeds of Freedom: The Peaceful Integration of Huntsville, Alabama is available as the original hardcover picture book, in paperback, for Kindle, and at Scholastic Book Fairs.

As part of the Candlewick Biographies series aimed at older elementary students, The Secret World of Walter Anderson is available in paperback and hardcover as a 6"-x-9" chapter-book including an index, making it great for book reports and classroom sets. The original picture book is still available.

The many accolades for THE SECRET WORLD OF WALTER ANDERSON:

Chosen to represent Alabama (2012) and Mississippi (2009) at the Pavilion of the States at the National Book Festival in Washington, D. C. On the CCBC Choices, the Best-of-the-Year list selected by the Cooperative Children's Book Center in Wisconsin. Chosen as an NCSS Notable Social Studies Trade Book for Young People by the National Council for the Social Studies and the Children's Book Council

KIRKUS Reviews selected The Secret World of Walter Anderson as one of the Best Children's Books giving it a Starred Review. Chosen by the Southern Independent Booksellers Alliance as a SIBA Okra Pick meaning it's a "Great Southern Book" and was a SIBA Bestseller

For more information about Walter Anderson, visit:
www.walterandersonmuseum.org
or
www.walteringlisanderson.com

And for more information about Candlewick Press, visit:
www.candlewick.com

For news of the Stimola Literary Studio:
www.stimolaliterarystudio.com

Invite Hester to your School, Library, or Event

Original songs and activities help Hester Bass engage audiences and get them excited about reading.

Invite Hester to your Conference for Writers, Librarians, Teachers, or Professional Development

Let Hester Bass share her secrets about writing stories for children, journaling, reaching goals, and getting on game shows!

Learn how acting exercises can help you write scenes that are more true-to-life with award-winning author and professionally-trained actress Hester Bass.

Hester is not currently booking school/library visits, writing workshops, or conferences due to a family caregiving obligation. But, miracles do happen, so if you've got an event coming up, email her in the Quick Links!